Bring on the noise!!

19/11/2010 - The Rita, Voltigeurs, Filthy Turd and Vomir live at the Grosvenor, Stockwell, London
What an apt venue for a noise concert. The Grosvenor is a cool but slightly dingy pub with a large backroom, nestled down a dark street in a pretty grim part of South London, and the urban jungle surroundings as I walked briskly from the station to the pub, and the worn wallpaper and dim light once inside seemed to intrinsincally reflect and, in my mind, enhance, the intensity of what I heard on this cold November night. Closing my eyes as the noise hit my ears, I found my mind's eye returning to the bleak vista of high rises, council estates and quiet streets that greeted me as I walked down Stockwell Road. Opening them, I would stare at the cobwebbed ceiling in what at times felt, as the volume hit fever pitch during Vomir's opening set, like some sort of out-of-body experience. If anyone doubts the ability of really harsh noise to be both transcendental and transporting, I recommend they go to see any of these guys. 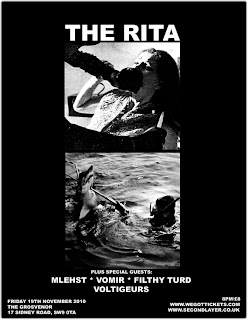 I'm not going to go through the evening's events in a particularly linear fashion, as, whilst all four (a fifth act, Mhlest, failed to appear) were excellent, two of them, opener Vomir and headliner The Rita are united in their artistic and aesthetic concerns, and I feel their similarities and differences are best approached together, especially as I have since delved a bit more heavily into their respective outputs.


Filthy Turd, in comparison to the walls of sound the other three acts unfurled, was a noise act in a more "traditional" performance art fashion, his theatrical approach involving mud, rocks and branches harking back to the genre's unofficial genesis in the performance art of COUM Transmissions, later to become Throbbing Gristle, although with a greater emphasis on harsh tones, deconstructed sounds and staccato bursts of free noise. Whilst the fact that he lathered himself in mud and stuffed sticks down his trousers felt slightly old hat to me, his use of two highly sensitive mics placed on a table that he then proceeded to bash the living shit out of, was startling and jarring, and his incorporation of strident guitar noise represented a welcome injection of musicality into what otherwise could have become an unsavoury faux-provocative vanity piece. What he was trying to express with his antics (dropping rocks, removing his clothes, etc) was unclear, but it added spice to what could have been a slightly cold set of performances, as can often be the case with noise.


Equally evocative was the set by duo Voltigeurs, made up of Skullflower legend Matthew Bower and his most recent creative ally, Samantha Davies, who has also appeared on a few Skullflower releases. Eschewing the aggressive starkness of the other acts, they opted for lowered lights and incense to create an intimacy that bordered on the spiritual, much as they have on Skullflower albums such as Malediction and The Paris Working, where guitar dissonance is associated with a semi-tantric quest for transcendence. But if Skullflower has a core of black metal, industrial and drone that has evolved out of Bower's 25-year association with the UK underground, Voltigeurs is a less forgiving beast, as the duo use their twin guitars to build up an implacable wall of feedback that leaves listeners isolated in sound. The droning quality of the sound -the irrepressible warmth of even the harshest of guitar sounds, if you will-, combined with the incense to create a ritualistic feel to the performance, Bower and Davies swaying gently, heads bowed, as if trying to summon up spirits. It may have actually been the most unsettling of all the performances.


Vomir and The Rita, meanwhile are possibly the two most famous and outspoken proponents of a noise sub-genre called Harsh Noise Walls (HNW), which The Rita's Sam McKinley pretty much invented back in the late nineties. I actually started delving into their respective oeuvres a few weeks before the gig, which was possibly fortunate, as HNW is a genre that you need to take time to appreciate. As the name suggests, the idea is to unleash gigantic sound edifices that originate in good old harsh noise, but with ideas like dynamics and tempo reduced to the barest of minimums.

In Vomir's case, you could even say that dynamics are so dissolved that the music radiates an impregnable inertia. For all its noise, it is completely still. Romain Perrot, to use his real name, stands stock still with a black plastic bag over his head, his back to the audience, presses a button and then... waits as the noise immediately bursts forth, swallowing everything around it. To my ears (and this music is so loud they're probably not a reliable guide here), the live set sounded much like his latest, superb, album, Renonce (Crucial Blaze, 2010), with white noise generators filtered through a series of distortion pedals to come out sounding like a mixture between a waterfall and an earthquake. But with less variation. It's possible that Vomir's music represents the apex of noise misanthropy, as performer and audience are rendered to nothingness by the sheer weight of the sound. By refusing any shifts or variation in his wall of noise, Perrot forces the listener, be he/she listening to an iPod or at a gig, to absorb the music completely, and then release their senses to it, without expectation or even release (Renonce is an hour long, with one track). It's a sonic purity that few artists can match, as abstract as Malevich's Suprematist Composition: White on White. Perrot has even compared his music to silence, and despite the paradox, it's a fitting analogy. After all, silence can be deafening. By creating music that dissolves the human in such an extreme way, Vomir has come very close to creating the most absolute of musical out-of-body experiences, be it live or on Renonce. As such, for all its extremity, it's also very peaceful and meditative. I was enraptured by his performance, and it was to prove the biggest highlight of an amazing evening.

Where Vomir unleashes a wall of unfathomable noise, The Rita gets his results using radically different means. Sam McKinley's sound is similarly harsh, probably harsher, but slightly more anchored in a sense of noise history, if only because in performance he stood hunched over a table covered in effects pedals whilst an ecstatic audience moshed away like teenage metalheads at a Korn concert. McKinley's music is probably more brutal than Vomir's, less designed to be absorbing and more to be an assault on listeners' ears, and therefore society as an imperceptible whole. The cover of his second album, the monstrous epic Bodies Bear Traces Of Carnal Violence (Troniks, 2004) depicts sexual mutilation and murder in typical noise style, referencing McKinley's love for Italian giallo films. The music within is as monolithic and dense as Vomir's, with heaps of distorted grunge surging instantly from the speakers and erecting an impenetrable wall of monstrous mayhem. But, unlike Vomir's music, The Rita's features subtle shifts, near-imperceptible accelerations and decelerations. Live, he gleefully interrupted the torrent at random times, using sound devices to create staccato bursts of crackling noise before re-releasing the molten flow of hideously beautiful drone. Almost like an invisible hand trying to clamp down on a wound to stop the flow of blood before being wrenched haltingly away again. Occasionally on Bodies Bear Traces Of Carnal Violence, sampled voices of screaming women bubble out of the mix before disappearing again, which makes this album so much more disturbing than any shock tactics deployed by other noise or hardcore or metal acts, because the sheets of formless, noisy drone The Rita creates are so void of reference, of dynamism or of perspective that any conceptualisation of what you're hearing, and therefore analysis or judgment, becomes impossible. Equally, on Thousands of Dead Gods (Troniks, 2006), McKinley uses recordings of being in a shark cage as the great marine animals swam around him, and sudden unidentifiable sounds will have you grasping around for identification, before your mind relaxes and allows a formless evocation of sharks, water and metal to settle over your senses. The artwork suggests anger and disgust at how these beautiful fish are treated, but in the hands of McKinley such transparent sentiment is deconstructed to the point of incoherence.

A fabulous gig all round, a proper sensory assault and big kudos has to go out to the wonderful guys at Second Layer Records shop and label for putting it on. If you want to buy some records, please support them by doing it here: www.secondlayer.co.uk.


I may have had a preference for Vomir's abstract conceptualism, but there was no denying the power, intelligence and sonic extremism of any of the acts. The Rita held the crowd in the palm of his hand, and I left with my ears ringing and a stupid grin on my face. Pure aural bliss. 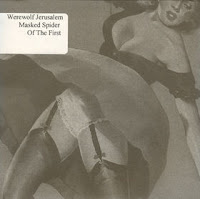 As an aside, and whilst on the subject of Harsh Noise Walls, a big shout out has to go to possibly my favourite album in the genre (so far): Masked Spider of the First by Werewolf Jerusalem (Troniks, 2007). One of many side-projects by infamous Houston noisician Richard Ramirez, WJ's concept is to take battered old radios and, as The Rita does with samples of sharks or snorkelling, filter them through endless effects pedals to create a crackling, unrelenting walls of harsh noise. And, as with The Rita, the main beauty of Masked Spider of the First comes when unexpected snippets of radio sounds emerge from the miasma to tickle the listener's ears before then flit away before she or he can grasp and process them. It creates a sneaky sense of forward momentum amongst such awesome static drone, and also evokes the approach of some of hauntology's most prominent artists, such as The Caretaker or Indignant Senility who use old, damaged vinyl to create dense walls of less abrasive sound. Using such old radios gives Werewolf Jerusalem's music a slightly nostalgic context, a wistfulness, as well as haunting sense of unease, as if Ramirez is reviving angry ghosts that linger in the ether. It's quite a rare album, but all of WJ's output, from self-released gems like God Has Shot Himself (2003) onwards, is remarkable. God Has Shot Himself is actually available for free here: http://www.archive.org/det...as_shot_himself, so do yourself a favour and download it. You'll be rewarded with some of the most peculiar, troubling and deep music released over the last few years. Then go and get any or all of the albums I've mentioned above. I certainly have not regretted letting this warped, dense and formidable noise into my life!